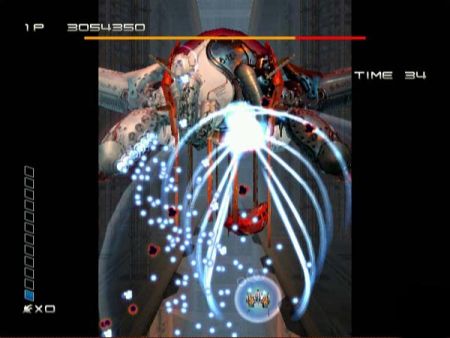 The classic SHMUP (shoot-em-up) may be one of the purest video game designs out there. Even for games like Ikaruga that implement systems that dramatically change the gameplay, the core mechanic stays essentially the same: the player must destroy enemies while dodging loads and loads of bullets.

Given the significance of the relationship between the player and enemy bullets, the design of said bullets is crucial to making a SHMUP work. The following is a series of guidelines that I use when implementing enemy projectiles in games.

Enemy projectiles should be… Bright
Because a SHMUP requires a player to be keenly aware of where enemy bullets are located, they must stand-out from the rest of the graphics in the game. As a result, such projectiles are usually brightly colored. Some games go so far as to make them flash different colors in order to make them more easily noticeable. Enemy projectiles are one of the few cases where it may be advisable to ignore the color palette of the rest of the game and purposefully render them with conflicting colors.

Enemy projectiles should be… Deadly
This may seem like a no-brainer, but I can’t understate how important it is for collisions between players and enemy bullets to be a significant event. In games with one-hit death, this condition is cleared because the loss of a life provides a clear enough sense of consequence.

Games where the player can take multiple hits need to provide a lot of feedback to make collision with enemy projectiles a suitably jarring experience. U.N. Squadron does a great job of this by having alarms go off when the player is hit as well as putting the player in a temporarily vulnerable state where one more hit will instantly finish them off. Sine Mora also does this well by having the player’s accumulated power-ups fly out thereby forcing the player to drop what they were doing and concentrate on recollecting power-ups.

Enemy bullets are key to making a SHMUP fun. If you ever find yourself building one, remember: enemy projectiles should be Bright, Slow, and Deadly.